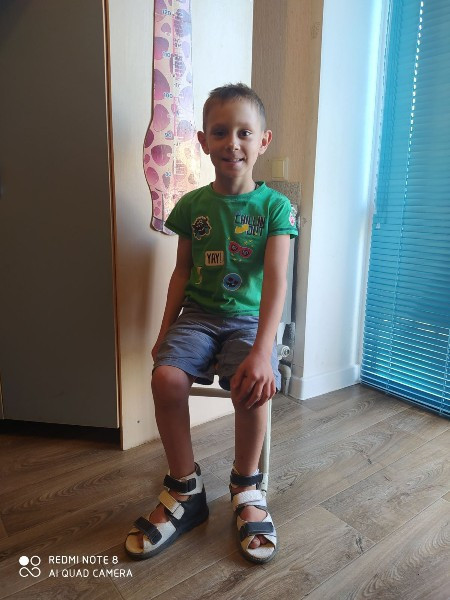 Disability in an orphanage is not a sentence!
A great, strong-hearted little boy proved it to us more than once!
You all remember Ilya Lambrinov and his heartbreaking story - an abandoned infant with cerebral palsy, who was in an orphanage for 5 years, one year in an orphanage, then in a boarding school.
Who would want to take an invalid child who cannot even walk? No one believed in Ilya... Only you and we, caring people, spread our publications about him and helped him look for a mom.
It was a miracle - Ilya has been with his family for a year already!
His adoptive mom was a guardian angel for the little lonely boy who was seriously ill.
She uprooted Ilya from the system, where he had been living for seven long years. Thanks to her persistence, Ilya walked on his own! And thanks to your help a year ago Ilya had a surgery based on the Ulsibat's method, which gave him the opportunity to be no different from other healthy children.
After the surgery Ilya went through several rehabilitation courses. His progress is breathtaking - what willpower and desire to be like everyone else!
The surgery is necessary before Ilya can walk normally again. They are waiting for the boy and his mother in Taganrog on September 8.
We have exactly 7 days to make one more miracle for Ilya.

Magicians! Let's not let his firm belief in those very miracles go to waste!
Let Ilya finally have a healthy childhood!